Being one of the greatest cities in the world, New York is the city that never sleeps. However, NYC is also in the process of never-ending change and development. A well-known cliche is that the only constant of New York is that it’s always changing. As a global, world-class center it is always developing and changing to meet the demand of its population. This change is evident in almost every aspect of life, even in its urban feel. The city is always experiencing change and transformation of its neighborhoods. This led to the disappearance of many of them and the creation of new neighborhoods. There are many of the Big Apple’s forgotten neighborhoods we can talk about today due to the city’s development.

How and why is Big Apple changing?

Economic growth and investment policies have always caused the transformation of NY. The need and greater good of the city caused an almost instantaneous change in the city. Many of the neighborhoods disappeared and are now forgotten due to the big money investment. Most of the original neighborhoods were declared slums and demolished in the name of urban renewal. If you are looking for one of these neighborhoods even experienced movers like Capital City Movers NYC will not be able to help you so easily. 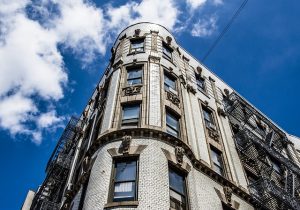 Some of the Big Apple’s forgotten neighborhoods are:

The Village once occupied the West side of Central Park. It is a prime example of how the low-income area was replaced with luxurious content through the city’s development. Some 1,600 residents of African American descent had to move out during this change. The plaque in Central Park holds the memory of Seneca Village and is the only information about the place.

Five Points had the reputation of the most notorious slum of the 19th century. It used to occupy today’s Lower East Side Chinatown. The slum was simply wiped away to make room for new development. Then, they built the civic center on this location with little detail of what happened to the residents. Now, you can see the remnant of Five Points in Mosco Street that contains the oldest row of houses in NYC. 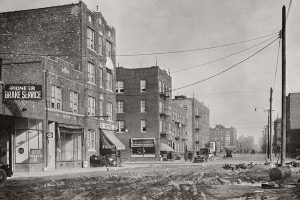 New development wiped out many of these old slum areas

The location of Tudor City buildings was once known as the Prospect Hill or Corcoran’s Roost. The area once contained a row of slaughterhouses in the so-called Goat Hill that later got the name Prospect Hill. However, the neighborhood got a new name, Corcoran’s Roost, again after a famous gang member from this area. The new development came in 1920 but the Church of Covenant that still stands in 42nd Street witnesses the past of Prospect Hill.

Phill Payton Jr. was the first black real estate mogul of the 20th century that founded Manhattan Town. This neighborhood between 98th and 99th street consisted of a number of buildings rented to black New Yorkers. This enclave was in the area reserved for the white population of the time. During the 1950s, the city declared it a slum only to demolish it making it a part of Manhattan history. Private housing was developed in the area and is now home to the Park West Village apartment complex. 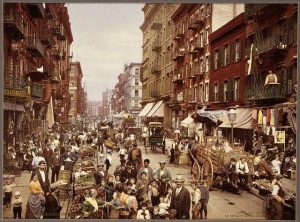 New York is still preserving the memory of this lost neighborhoods

Besides these, there is a number of Big Apple’s forgotten neighborhoods that have completely disappeared. You cannot require state assistance for your Brooklyn move to Pigtown or Little Syria because they are gone.

Also, neighborhoods like San Juan Hill, Five Points, Willets Point are all part of the rich NY history that people have almost completely forgotten about. Today they are a testament to the city’s change and development and a reminder that this change will not stop and that other neighborhoods will disappear and transform too.