Every day 1,000 people move into Florida. Many of them are retirees relocating with the idea to spend the second halves of their lives here. There’s really no mystery why this is happening. Even the coldest months here, on average, are around 70 degrees when it comes to daily high. So, people want to live their golden years in a place that’s sunny and warm all year round. And what better state to choose than one and only Sunshine State. Additionally, Florida is very tax-friendly for retirees. There’s no state income tax, and there are ways to lower real estate taxes. Seniors here get many other benefits also. So, the only thing that’s left is to choose where exactly in Florida you’ll move. And we’re here to help you with that. That’s why we made a list of the best places to retire in Pinellas County.

Now, you may wonder why Pinellas County as there are many other places and areas in Florida. Well, after a lot of scouting and a lot of talking to professionals, we’ve concluded that this area is simply the best for retirees. This place has an ideal combination of health care access, safety, and entertainment options. Dive in to learn more.

This is a county located on the west-central coast of Florida. The population of the area is somewhere around 900,000 residents and it has many things to offer to retirees. What we noticed recently is that people seem to be scared of moving to Sunshine State due to the danger of hurricanes. However, many of them don’t know that west coast of it is much safer than the right. So, that’s another plus for this county.

There are many islands, passes, state, and national protected areas for all of you that like to explore nature. Some of the best under the radar beach towns in Florida for retirement are located here. And since we know what state we’re talking about we don’t have to additionally point out that you’ll be in close proximity to many parks whichever location you choose for your move. So, without further a due, here are the best places to retire in Pinellas County. 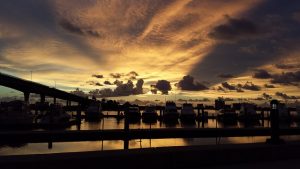 Pinellas County is often described as one of the most beautiful areas in the whole of Florida.

Clearwater is the county seat, but not the biggest city in Pinellas County. It is located northwest of Tampa and St. Petersburg and the west of the town lies on the Gulf of Mexico and it makes the third leg of one of the most popular tourist destinations in all of Florida. When people think of the city they think of the white sand beaches and the incredible Clearwater Marine Aquarium. It’s the ultimate Florida postcard picture and one of the best places for retirees in the state. You’ll simply feel as you’re on vacation forever.

Additionally, because Clearwater is so close to Tampa access to an international airport is as easy as to movers that are there to help the elderly. Incredible beaches, infrastructure, and nice people. What else could you want?

Dunedin is a city located just north of Clearwater, but in fact, it has lower crime rates than the before mentioned city. It is, of course, a smaller town with only 36,000 residents living here. But, that doesn’t diminish the importance of it. What else makes this place special is an amazing walkable downtown that is full of independent unique shops, restaurants, and other places you’ll be drawn to. Know that there aren’t any franchised food chains or big box stores here. Only locally sourced amazing cuisine.

There are many excellent beaches to visit, but that’s far from all the fun you can have by or on the water here. Fishing is also possible and you can even learn to surf of the Gulf while you’re there. It’s never too late to try fun things. Especially when your biggest worry in the world is how to organize your beach house after relocating there.

Awaken your new youth on beautiful beaches of Gulf bay.

The next on our list of the best places to retire in Pinellas County is another great little town close to Tampa, St. Petersburg, and Clearwater. All of this, of course, make it even closer to the wonderful beaches of the area. Safety Harbor is the smallest place on our list by now with just 18,000 lucky people calling it home.

The name Safety Harbor proves itself as it is the safest town on our list. You’d probably also want to know that the cost of living is slightly below the average for Florida. There are many options for evening entertainment and the community is very nice and warm. So, even if you already live in Florida, we wouldn’t think that it’s a bad idea to move your home and transport your possessions to a new neighborhood right in the middle of this beautiful little town.

And how could we complete the list without the absolute star of the show, St Petersburg? It’s the largest city on our list and it counts almost 260,000 residents. What could be said for it is that it is a place of variety. You can find and buy a home for anywhere from $160,000 all the way to $1,000,000 or more. We would advise you to take a smaller home and spend the leftover money having fun as you’ll have plenty of chances. If you’re not convinced, check out these 5 great reasons to downsize your Florida home.

The city is divided in two sides, one of which is away from the water and offers a mix of bungalows, Craftsman-style cottages, and Spanish-influenced architecture solutions. This part of the town is easily bikeable or walkable and it has an amazingly artsy downtown.

The vibrant downtown is only one of the reasons why St. Petersburg is one of the best places to retire in Pinellas County.

When it comes to entertainment, there are many restaurants and bars at your disposal. However, it seems that retirees that choose this place for their home prefer the Salvador Dali museum, theaters, and concert halls of the city. It seems that St. Petersburg is all of the best of Miami, but without all the congestion that is present there at all times. And that is why it is one of the best places to retire in Pinellas County.